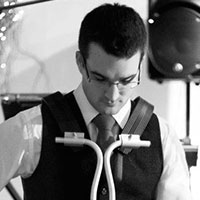 Scott has been drumming since the age of 8 when he received drumming lessons from Roddy MacDonald at Bucksburn & District Pipe Band. He joined the Novice/Juvenile band in 1995, and by 1997 the band were crowned British, Cowal and World Champions, as well as the overall Champion of Champions for consistency throughout the year. Moving into the senior Grade 2 band for 1998, Scott has since played in Grade 1 or 2 ever since, winning numerous band, drumming and solo prizes and junior and adult levels, including the North of Scotland Solo Drumming Championships in 2009. In 2009 and 2010 Scott led the Grade 2 drum corps with a very young inexperienced group to 8th place in the European Championships before returning to teaching the juniors the following season. Scott passed the highest possible drumming exam available in 2009 gaining the Piping & Drumming Qualifications Board Level 4 award (SQA Accredited). In 2014 Scott joined internationally renowned Grade 1 World Champion Drum Corps Peoples Ford Boghall & Bathgate Caledonia Pipe Band.